Shock and Vibration Finite Element Analysis of a Printed Circuit Board

A commercial-off-the-shelf power supply was to be modified for military use. It was not obvious whether the existing design was robust enough to pass the military shock (MIL-S-901D) and vibration (MIL-S-167) test protocols. Before expensive prototypes were manufactured and tested, the system was to be analytically evaluated in an effort to identify weak points so that they could be redesigned.

MSI was able to simulate the standardized military shock and vibration test protocols using finite element techniques. Three-dimensional models of the circuit boards were first created. These models included all the major electrical components, as well as the board itself and its mounting screws. The component wires and connections were included explicitly in the model. Particular attention was paid to the solder joint connections.

The appropriate random vibration loading conditions were then applied to the board through the mounting points on the rack simulating the Environmental Stress Screening (ESS) protocol. In addition, shock and vibration loads were applied separately in all three orthogonal directions as per the specifications. The deflections and stresses within each of the components were surveyed for each run. Animated plots were made of the natural frequency mode shapes and the transient response to the shock load and presented for review by the customer’s engineers. Certain component leads and their associated solder connections exhibited stresses high enough to consider them potential failure sites during the shock and vibration testing. Based on the animated modal and transient deflection shapes of the computer models, it became obvious how to modify the designs to make them more robust. 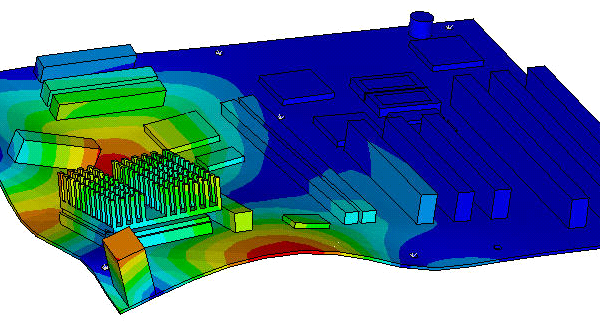 Deformation due to shock demonstrating "tipping" of components

In general, additional support was needed to prevent “tipping” motions of the components. Upon analysis of the modified boards, the stresses were found to decrease significantly.

Often, complicated three-dimensional analyses such as these take too long to be useful to design engineers faced with aggressive product development timelines. This was not the case here. By combining the time efficiency of Pro/Engineer and the analytical power of ANSYS Multiphysics, the analyses were performed quickly, yet still with the high level of detail needed to identify problem areas and solutions.

For an additional case study on circuit board thermal analysis, click here.