Mechanical Solutions, Inc. (MSI) was contracted by a manufacturer to perform a seismic structural analysis on three identical large pump systems in a low-activity and high-activity nuclear waste treatment process.  The scope of the analysis included the pressure containment casing, nozzle attachments, support system and driver.  The pump systems were required to meet the specs of Seismic Category 1 (SC-1). 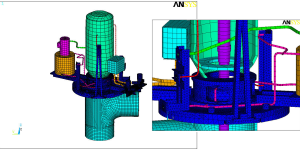 Finite element analysis (FEA) techniques were employed to perform an equivalent static analysis to evaluate stress levels as a result of the seismic input in combination with nozzle loading, impeller thrust and torque.  The effects of the motor, motor attachment, and rotating components were in the model.  A conservative seismic approach was taken due to the configuration uncertainty of the piping and pipe supports.  Natural frequencies and mode shapes were also investigated and compared to running speed and other excitation sources.

The analysis indicated that the seismic stresses in the pump components as well as all bolting were found to be within acceptable levels.  Peak stress levels were below the yield strength of the materials used.  The major structural natural frequencies were identified and determined to be at a safe margin excitation sources, and therefore resulted in minimal increase in the quasi-statically calculated seismic stresses. 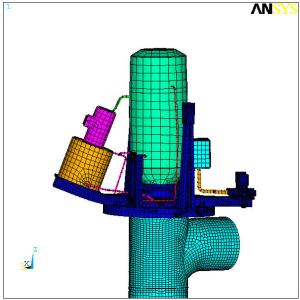 The normal operating peak stresses due to internal pressure, nozzle load, and up-thrust were well below the threshold of expected load cycling, so fatigue failure was not expected.  In the final analysis, MSI concluded that the pumps would meet their seismic and fatigue analysis criteria. 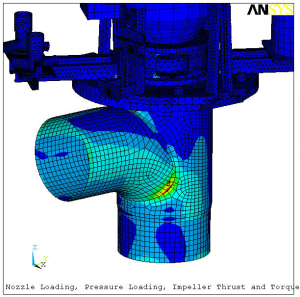