Mechanical Solutions, Inc. (MSI) was contracted by a power generation company to solve excessive vibration problems on two newly installed Induced Draft (ID) fans.  High vibration levels at one times (1x) running speed were reported that exceeded trip levels during start-up.  Traditional vibration analysis used by others had not successfully resolved what initially appeared to be a straight-forward unbalance and/or misalignment problem. 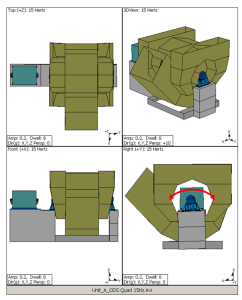 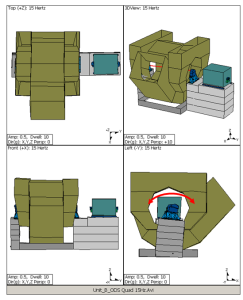 ODS tests showed horizontal rocking motions of both inboard and outboard piers in both fan installations.  This horizontal motion was more pronounced in fan B.  There was also evidence of looseness of the bearing assemblies (housing, support and soleplate), especially in the outboard bearing assemblies of both fans.  MSI determined that the rotor critical speed had shifted downward toward the running speed of 15 Hz, due to the high flexibility of the rotor supports and pedestals.  This rotor critical speed and the structural resonance near 15 Hz interacted with each other and were the likely cause of the modulated orbits of the fan B rotor.  Rotordynamic analysis showed that lateral stiffening of the outboard pier would detune the 1x resonance sufficiently to decrease the vibration amplitude to acceptable levels.

The root cause of the excessive vibration was found to be the flexibility of the soil under the base mat of the piers.  MSI recommended that the horizontal stiffness of the outboard bearing pier and support (base mat and soil) assemblies should be increased substantially in order to de-tune the resonance condition of the rotor critical speed and the pier structural natural frequency with the running speed of the units.  All of the bearing housing and support assemblies should be tightened and stiffened as practical to minimize overall vibration.

The soil flexibility root cause would have been extremely difficult and expensive to determine without the benefit of MSI’s specialized and well-proven troubleshooting approach.  A design audit, performed before installation, could have been used to avoid the problem.