MSI was contracted by a major South American petrochemical plant to perform detailed vibration tests and FEA modal and stress analysis on a Urea Vibrating Screener.  The screener had been suffering periodic failures due to cracks along the welds, plates, and structural beams, as well as hanger wire failures since installation in 1999.  The result was lost production of about 25 metric Tons/hr per unit (Total 8 units in the plant, at $200/Ton resulting in 1 MM$/day).  Maintenance costs were also high.

The screener is fed from the top nozzles close to the gear box.  The eccentric output shaft of the gear box allows the screener to shake in its plane and vibrate the internal meshes.  This separates the pellets by sizes (discharge at the bottom).  The unit is supported on the base structure and suspended by four wires, as shown in the Figure 1. 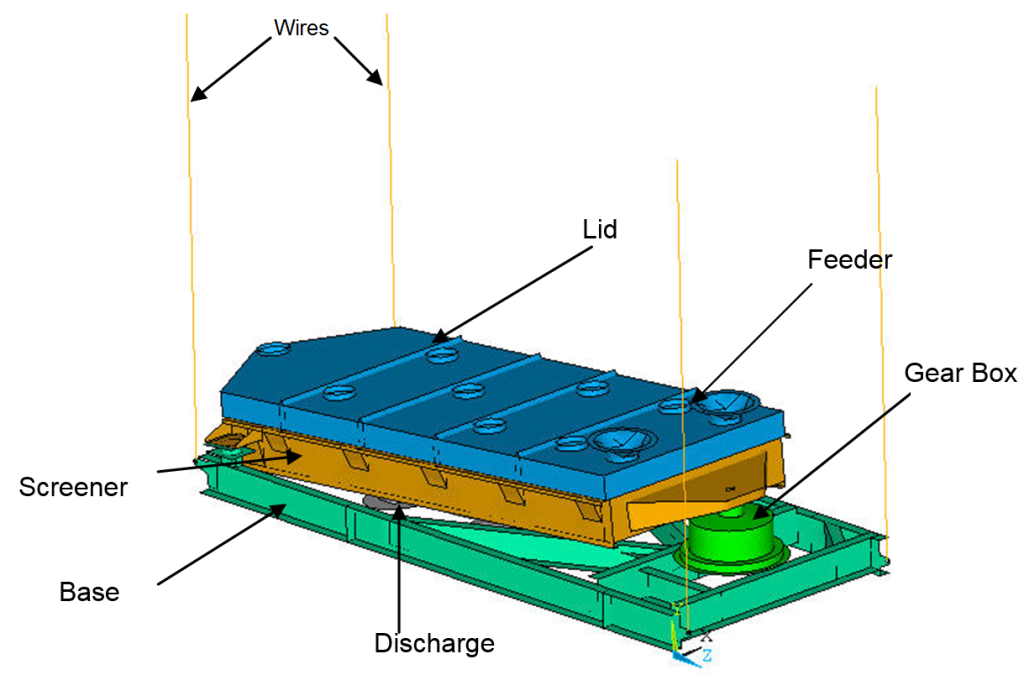 The highest amplitudes of vibration were developed at the gear box output running speed (3.56 Hz).  MSI performed a modal impact test on each main component of the unit (screener and base structure) in order to determine the natural frequencies of the system.  MSI also performed a detailed finite element analysis (FEA) modal analysis to determine the overall natural frequencies and mode shapes, creating a 3-D shell model of the screener and structure (Figure 2).  MSI was able to compare real-world mode shapes with mode shapes predicted by the analytical software.

The plate modes had an amplifying effect when coincident with the harmonics of the screener running speed (3.56 Hz). The plate modes coincident with running speed (lower harmonics) and the motor speed (19.16 Hz) first harmonic were very dangerous for the welding zones (Figure 3), and the FEA verified they were the prime reason for generation of cracks along the welds.  When the screener was statically loaded, the stress was low around the structural lugs and coupling between the gear box and screener header.  This implied that the problem was due to the high stresses caused by the resonant condition between the lower frequency modes and harmonics of the running speed, rather than by the operational steady load.

MSI recommended dampening the plate modes to reduce the amplification factor and vibration.  MSI re-installed the aluminum lid with a thinner rubber gasket, tightened the clamps, and welded strategically-placed horizontal ribs along the main beams.  This yielded a greatly increased screener life.