The longevity of a total hip arthroplasty depends on many factors.  Often times the weakest link in the system is the cement mantle that fixes the metal hip stem to the surrounding bone.  In an effort to combat this, a hip stem manufacturer came to MSI to develop a better understanding of the effect of their hip stem design on the cement mantle stress distribution and to find ways to improve it.

Finite element model of the system, including the hip stem, cement mantle, and surrounding bone.

The model was built using CAD solid modeling techniques and meshed and analyzed using the ANSYS® finite element code.   Typical joint and abductor muscle loads were applied.  For this analysis, the cement was assumed bonded to the hip stem, although for subsequent analyses, varying amounts of debonding were allowed by employing sliding frictional interfaces. 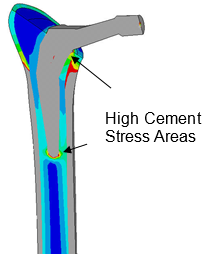 Cement stress levels were found to be high near the distal tip and in the most proximal region.  Debonding was predicted in the proximal/lateral area of the hip stem.  Cement cracking was predicted in the distal and proximal/medial areas of the mantle.  The analysis was then performed with a drastically different cross-section for the hip stem.  Proximal and distal cement stress levels were found to be reduced by a factor of two.  The final design of the hip stem was driven by these stress results.   The computer stress analysis techniques employed clearly contributed to the long term performance of the joint replacement.  The probability of crack formation within the cement and subsequent hip stem loosening was greatly reduced.