Use of Experimental Modal Analysis to Support Pump Retrofits

MSI principals were contracted through a major OEM to perform their unique time averaged pulsing (TAPTM) impact modal testing on three 30 year old, reliable, packed-stuffing box, multistage barrel pumps in critical refinery process charging service. Upgrades from the packed-stuffing box to mechanical seals were required due to new OSHA requirements for pumpage containing benzene. The user and OEM had previous bad revamp experience when up-front modeling was not performed. TAPTM was performed on the operating pumps to determine actual existing rotor and structural critical speeds and damping coefficients. This information was used by the OEM to accurately calibrate their “as built” finite element models, which were then used analytically to optimize the design of the “revamped” pumps. The resultant upgraded pumps have performed very successfully. The methodical approach described above can be used to evaluate mechanical seal replacements and other turbomachinery upgrades, thereby helping users meet new federal regulation (such as Process Safety Management - OSHA CFR 29-1910) requirements. 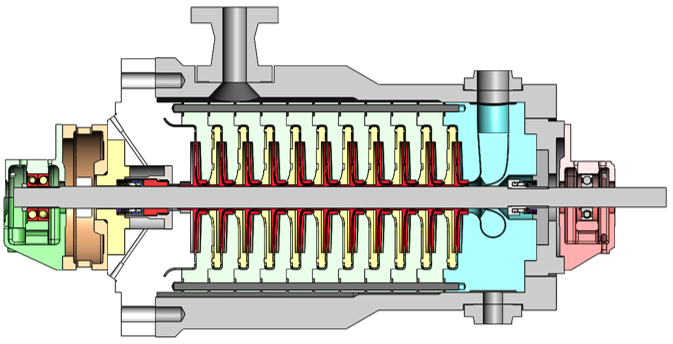 Redesign of the internals of a main boiler feed pump pair at a Southeastern U.S. power plant was able to be performed “sight unseen”, based on results of modal test “sounding” with TAPTM to determine the stiffness, mass, and damping of all internal components prior to pump disassembly. From this information, it was able to be determined which bearing and seal components required repair due to excessive clearances. This made it possible for redesigned and repaired components to be available at the next plant outage, to minimize the time needed to repair the pump.

A major petrochemical company had a serious gear box failure problem in some service water pumps, driven at variable speed by a steam turbine though a right angle 1:1 gear box and hollow drive shafting. Many experts from the pump, turbine, and gear manufacturers had attempted without success to understand and cure the problem over a 3 year period. Replacement of the gear boxes with some built to more stringent standards had no effect. External consultants using test or analysis also had failed to solve the problem.

Analysis by MSI engineers of torsional and lateral rotor and structural frequencies confirmed earlier consultant findings that the design should be sound in this regard. Torsional modal testing, using testing techniques that could be applied while the pump/gear/turbine operated, found that all rotor system natural frequencies were close to their predicted values, and with even more damping than predicted.

However, experimental modal analysis using MSI’s TAPTM method on the hollow drive shaft showed that it had a “bell-mode” at the gear meshing frequency, where the hollow shaft ovalized with very little damping, causing the shaft length to change through the “Poisson effect”.   The driving force was shown by the test to be the combined torsional and axial load from the bull/pinion gear meshing. The drive shaft was filled with grease to damp out this unusual vibration. The gear box noise immediate fell a factor of five, and all gear box problems ceased.