A major pump OEM called on MSI to help resolve multiple pump driveshaft failures for an ore mining company in East Africa. At the company’s raw water pumping station, two of the three diesel driven vertical turbine pumps had sustained the catastrophic failures monthly. Typically the station pumped river water through a long pipeline for slurry production at a separate mining / processing facility, but the lack of pumping capacity had shut down the operation, costing its owners $100K per week in lost production revenue. The prior efforts of other consultants had failed to zero in on the true source of the broken driveshafts, and the company needed to restart the mining operation. MSI’s goals for this project were: a) to identify the root cause of the failures and b) to help the Customer devise a specific solution that would end the recurring driveshaft failures as well as excessive pump vibration. 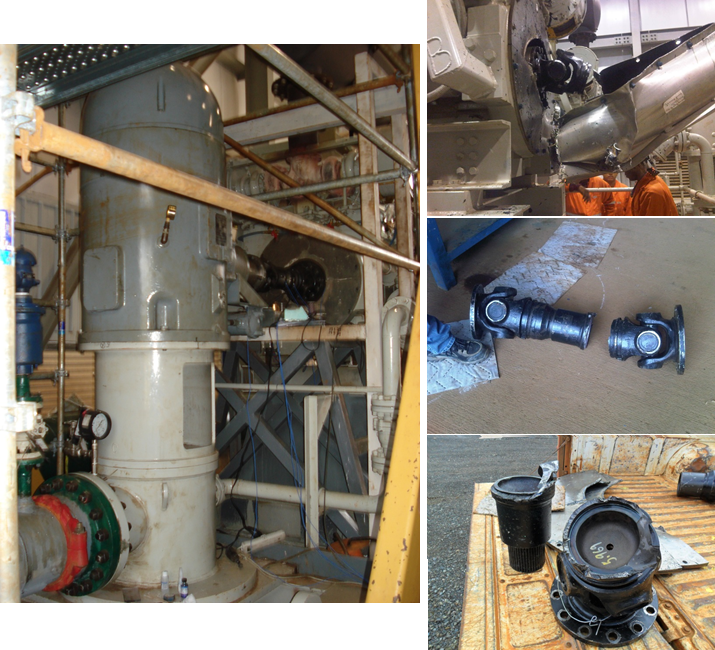 The exposed driveshaft (i.e. with the safety guard removed) appears in the figure at left, along with the right angle gear drive and the top of the pump. Three views of one fractured driveshaft are depicted, right. The relative size of the massive driveshaft is shown by the operator’s foot that appears in the center view.

MSI traveled to the remote pumping station and performed extensive vibration testing of the pump systems, which had been placed back in service after replacement driveshafts, as well as more structural bracing and grout suggested by others had been added to them, to no avail based on continued high vibration. Over several days MSI recorded sufficient test data for sure-footed diagnosis. Working in parallel, engineers at MSI’s offices evaluated the test results, and performed a finite element analysis (FEA) of the welded driveshaft using measurements from the test site. 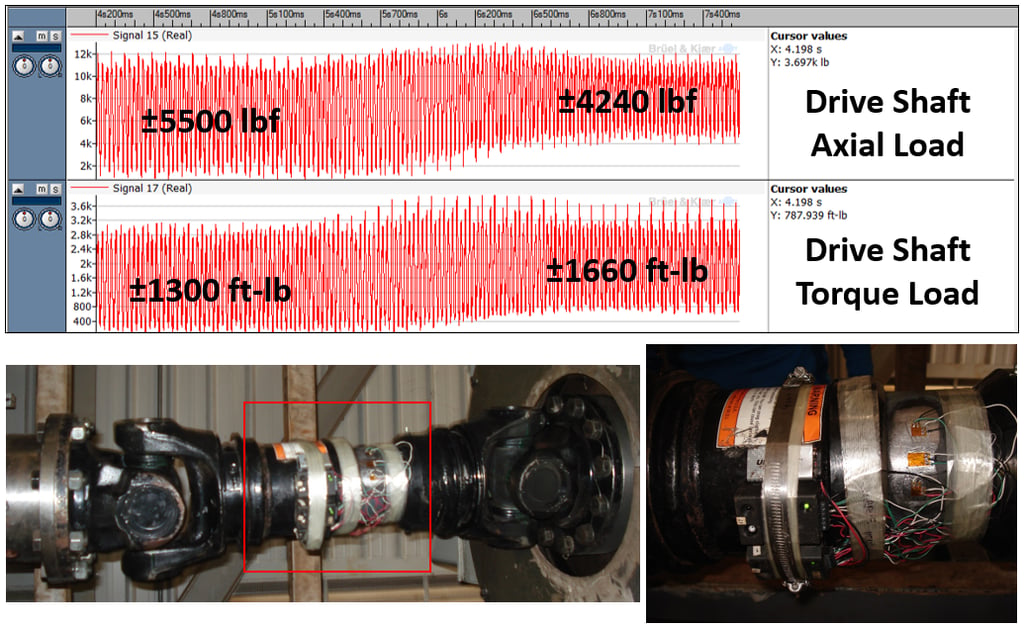 After evaluation, MSI determined that a jammed coupling spline, due to insufficient axial gap, was leading to excessive, oscillating axial and torsion loads combining to cause the driveshaft failures in both of the pump systems. Poor tuning of the diesel prime movers resulted in very strong ½x rpm torsional harmonics. The axial and torsional modes of the driveshafts were in resonance with the unusually high 1½x running speed harmonic, which made this response particularly harsh. The peak torsional oscillations exceeded 90% of the mean torque value in each driveshaft. Operating Deflection Shape (ODS) animations of the test data revealed a periodic cantilever bending motion of the right angle gear heads at this harmonic as well, which moved the horizontal driveshafts longitudinally in the direction of the prime movers. Strain gauge data showed that the driveshafts bound up in the axial direction during this process, which caused them to develop large cyclical compression stresses in addition to cyclical stresses from the torsional oscillations. MSI’s FEA of the steel driveshaft design showed that the stress intensity level in the welded driveshaft coupling attachments, due to the combined oscillating loads and steady stress, was great enough that fatigue fracture of the welded joints would be expected. 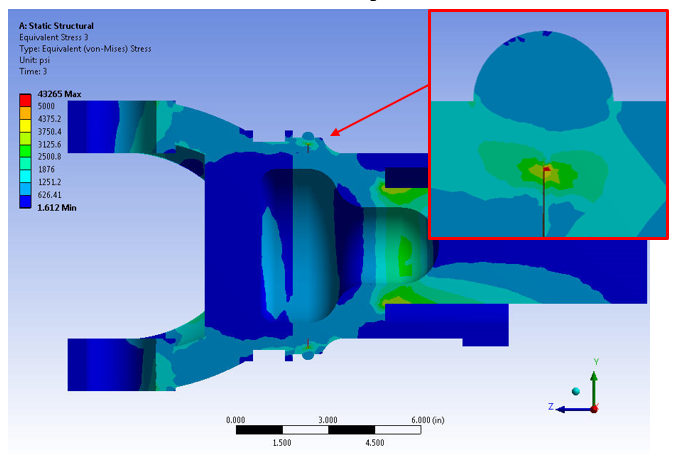 MSI advised that flexible couplings should be installed between the prime movers and the right angle gear pinion shafts, to ensure flexibility in the axial direction and attenuating response to torsional oscillations. This modification would prevent the damaging combined stress condition from recurring. For added insurance, MSI recommended that the diesel prime movers should be tuned properly at the earliest opportunity, since in their present state they generated unusually high torque impulses at ½x rpm multiples in the pump system.

Within one week, MSI’s coordinated testing and analysis had identified the root cause of the driveshaft failures that had eluded others for months. The decision makers were provided clear evidence with effective recommendations to solve the problem. ODS and Experimental Modal Analysis when coupled with appropriate analytical techniques form a powerful troubleshooting tool, to comprehend issues and to facilitate effective solutions for the complex vibration problems which can occur in pumping systems.

The Power of Video Vibration: Understanding