Mechanical Solutions, Inc. (MSI) was initially contracted to perform specialized testing to quantify the level of flow instability in a Residual Heat Removal (RHR) pump system by the nuclear power plant owner. The task was to perform a CFD analysis of the existing double suction pump inlet, and to make recommendations for improvement with regard to flow-induced vibrations at low volumetric flow rates.  The pump operates at 5,500 gpm, far from its best efficiency point (BEP) of 7,700 gpm.  The CFD analysis was performed to aid in resolving pump vibrations at the lower flowrate.  A solid model of the pump suction, impeller, and pump volute was created in Pro/Engineer.  Thereafter the model was meshed & analyzed in ANSYS CFX. 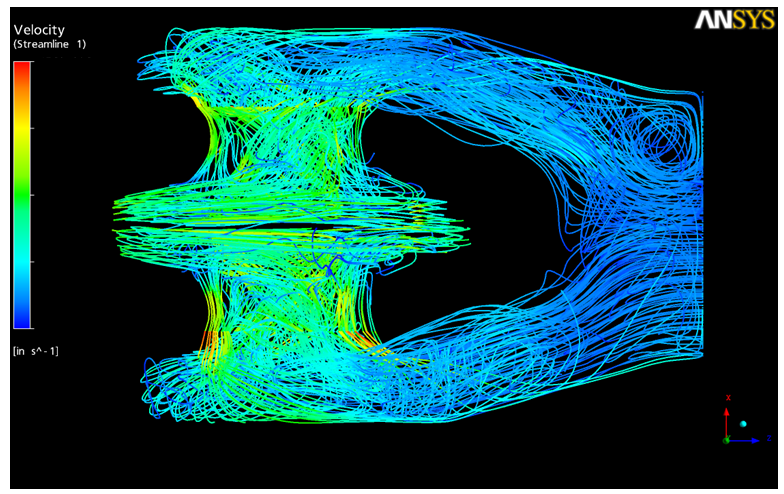 The analyses conducted included a model of suction geometry alone, suction geometry with a low-vane count impeller, and several refinements.  The inclusion of the impeller domain unveiled a significant amount of re-circulation in the suction, where none was present when the suction was solved alone.  This recirculation occurred at both 5,500 gpm and the BEP. MSI recommended an impeller redesign to resolve this issue.

MSI also explored a possibility of a modest suction geometry redesign due to a noticeable mass flow imbalance between the two impeller inlets noticed by the OEM when the suction domain was solved by itself due to the OEM’s limited computer resources.  This imbalance was much smaller when the impeller domain was introduced in MSI’s more comprehensive model, solved on MSI’s 72 parallel processor computer. Therefore, MSI was able to conclude that the suction modification (requiring an expensive new casing) was unnecessary if the pump operation was limited to 5,500 gpm, once it was verified the recommended impeller redesign did not alter the mass flow distribution significantly.

Based on the detailed CFD analysis work, MSI concluded the following:

Based on MSI’s recommendation and work results, MSI designed an anti-cavitation surge device to help alleviate the problem on a near-term basis, while a new impeller was designed by the OEM for this difficult service.

Efficient Radon Fans, coming to a house near you...