A special experimental modal analysis technique, TAP™(acronym for Time Averaged Pulsing), has been developed by MSI’s engineers. TAP™ can effectively determine critical speeds of all rotating machinery under operating conditions, so that they can be “bump” tested for natural frequencies, without shutting them down. This technique is especially useful in multistage high energy variable speed pumps whose rotordynamic characteristics are speed and load dependent. With TAP™, a “bump’ test properly accounts for the boundary conditions set up by the operating condition.  Also, it is able to identify any problem or potential problem without any downtime of the tested pump or nearby equipment, which can be important in many applications and industries.

TAP™ is superior to “waterfall” or “cascade” plotting, the most common method of determining a critical speed, which consists of a succession of spectra as the machine runs up to speed or coasts down between the operating and static conditions.  TAP™ totally eliminate the problems which may lead to incorrect conclusions drawn from a cascade plot. These problems include 1) the dynamic coefficients of bearings and annular seals (Lomakin effect) can be substantially different between the transients of start-up and shut-down, versus the steady state operating condition, 2) the excitation source and level is unknown, and hence the frequency response can not be quantified, in terms of the damping at each natural frequency, to determine if it is critical or not.

The TAP™ technique incorporates time averaging statistics to rapidly improve the signal-to-noise ratio under operating conditions. Time averaging reduces of the amplitude ratio of the random naturally excited vibration versus the impact-coherent vibration during the signal processing, to greatly emphasize the effect of the “bump” while the machine continues its normal operation. 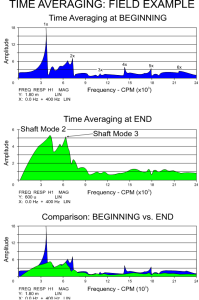 A test on a fourteen stage horizontal axially-split case centrifugal pump can be used as an example.  The pump in this example is rated at 970 hp driven by an induction motor at 3600 RPM.