In general, MSI’s role in helping to ensure equipment reliability takes place at three levels:  (a) preconstruction audits and analysis during the design phase to help prevent problems, (b) using specialized testing and analysis techniques to solve performance, acoustic, vibration, stress, or thermal problems before failure takes place, and (c) performing root cause analysis (RCA) after a failure.  MSI recently performed RCA to determine the root cause of cracks found in multiple blades on several rows in the low pressure (LP) section of a large axial compressor.   The key deliverable was recommendations, supported by analysis results and experience, for extending blade life.

To accomplish the RCA, following inspection of the failed components and detailed interviews with End User personnel, Mechanical Solutions, Inc. (MSI) performed a detailed 3-D finite element analysis (FEA) of each failed blade and the assembly disk.  The analysis was focused on determining the mean and worst-case alternating stresses during normal operation and surge events.  Natural frequencies of each single blade and the assembly disk were also determined by analysis calibrated by non-operating modal testing in order to verify possible resonances in the system.

The cracks were found at the base of the blades (above the fillets) where they meet the platform.  Based on MSI's RCA, the root cause of the cracks in the LP section blades was determined to be a consequence of several surge events that occurred during uncontrolled shut-downs of the units after power outages of the self generated power of the plant. These events generated non-linear loading that was 10 to 20x the gas bending load at low frequency, which increased the alternating load producing low cycle fatigue cycles in the material.

The plant could not guarantee that the root cause occasional surge events would not be repeated. Therefore, the solution needed to be a design change to the axial compressor blading, along with suggested system improvements.

The Interference Diagram of the disk assemblies did not show potential interferences with any typical direct excitation source such as Blade Pass Frequency or difference excitation source between rotating blades and stationary vanes.  Forced response analysis performed indicated that there was sufficient separation margin from potential excitation sources, resulting in stress levels that would not lead to a failure of the blade under expected design conditions.

The detailed stress and modal analyses performed for each failed blade revealed that the blade designs would be adequate for the normal operating condition of the unit.  However, excessive cyclic stresses near the blade fillet were likely during surge events.  There was limited space to place a larger fillet between the airfoil and the platform to reduce surge stresses and improve the life of the blades.  Therefore, different materials were considered for the blades with higher endurance limits that would allow for considerably more cycles before crack initiation.  In addition, an option was suggested that entailed increasing airfoil thickness at the base. 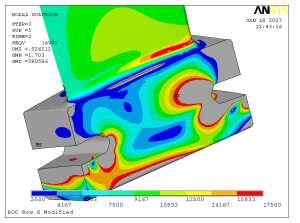 MSI also recommended system and operational modifications to try to minimize the number of surge events.  These recommendations included adjusting the anti-surge system by slightly opening the vent valves before shut down of the unit, relocation of the recirculation valves to improve response during upset conditions, and suggestions for better maintenance of the recirculation valves.  Finally, a sensor system was specified that would monitor potential crack development by sensing a permanent blade displacement change, as calibrated by MSI FEA results.