MSI was contracted by a major petrochemical company to determine the reasons for chronic lineshaft failures in some 100 foot (30 meter) long vertical pumps, in service on an offshore oil platform.   The natural frequencies predicted by the model, and their associated mode shapes, were to be evaluated for possible participation in the failures.   The model was also to be used to determine whether resonance was responsible for the high vibration sensed at various gearbox and discharge head locations, when operating at maximum running speed. 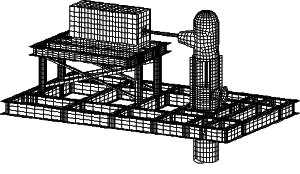 The motor, pump, and right angle gearbox were all mounted on a common base, which was relatively flexible because of the size of the overall structure.  MSI used ANSYS Multiphysics® to model the entire assembly, including the internal details of the diesel engine driver, and the individual I-beams and channels that made up the complicated base.   The bowl assembly and all column piping details were modeled, including the water in and around the pipe, the bearing spider assemblies, and the lineshaft plus its couplings.  This resulted in a whopping 80,000 degrees of freedom for the model and a wavefront of 2000, which meant the FEA code had to solve a matrix of about one billion numbers.  Fortunately, our top-of-the-line software was up to the task, and the enlightening results that it provided showed that the extra detail  was worth the trouble. 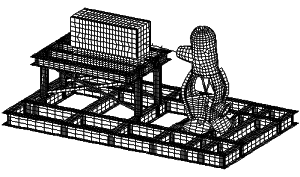 The results indicated that there were nearly 250 natural frequencies from zero up to 6X engine speed.   Some of these modes explained the high above-ground vibration levels at the higher engine harmonics.  The most important mode, however, was the lineshaft first bending critical speed, which was predicted to be almost exactly at the pump running speed.  This mode had drifted well below the value predicted by the manufacturer because of the flexible support provided to the shaft by the very long column piping.  This problem would not have been able to be predicted without the base and column piping flexibility detail that MSI had included in the model.  A change in bearing spacing was proposed to cost-effectively eliminate the lineshaft critical speed resonance, and a switch to a torsionally soft coupling was recommended to eliminate the excitation of the high order above-ground natural frequencies by the diesel engine running speed harmonics.