Mitigating Resonance in a Sewage Plant

Pump Vibration Testing Demonstrates Why Pump and System BOTH Matter

A newly installed vertical solids-handling pump in a wastewater facility experienced pump vibration problems that were caused by the foundation and piping, rather than by the catalog-standard pump. The previous troubleshooters had been fooled because whenever the pump was running, the pump, entire pedestal and nearby piping were all shaking. However, when the pump was not running, there was no vibration. As a result, the pump bearings had very limited life, and the mechanical seal would chronically leak.

The owner claimed that it was a bad pump, and the OEM said that it was an installation problem. MSI engineers were contracted as a third party to investigate the problem. The pump vibration tests included impact modal “TAP™” testing and Operating Deflection Shape (ODS) testing. The pump testing proved that a resonance was in play, and showed that a horizontal rocking natural frequency was within 2% of the operating speed of 1185 RPM. This was clearly indicated by the Fast Fourier Transform (FFT) impact frequency response function (FRF) log vibration vs. frequency plot, as shown below, where the "mountain peaks" of g level per unit impact force indicated natural frequencies. This particular plot was for the bottom of the integrally-attached motor (horizontal plane in-line with the discharge), but had essentially the same shape for the concrete pedestal, floor near the pump, and the flexibly attached discharge piping. This conclusively demonstrated that the resonant natural frequency was an issue for the ENTIRE pump/motor/support/foundation/piping system, NOT the pump alone. This made sense, given the same pump had been successfully installed in other locations. 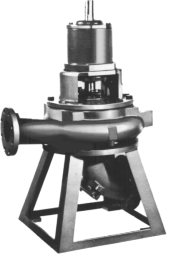 Vertical solids-handling pump that was tested as a system

The next steps were to determine how to fix the pump vibration problem, and who should be responsible. To pictorially illustrate the pump's problem vibration, MSI created a model of the pump and motor, and the pump's piping and foundation, built solely from the “truth” of the test data. The model not only showed the vibration mode shape at the problem condition, but was able to be used to calibrate a companion Finite Element Analysis (FEA) model, in which assumptions and boundary conditions were consistently modified until the FEA and test results closely agreed. The FEA model was then confidently exercised to explore "what if" installation scenarios and practical solutions. FEA indicated that the contractor had not supported the pump's discharge piping sufficiently, and instead had accidentally used the pump as a convenient anchor point. The poor support coupled with the pump's own mass and stiffness to create a natural frequency that was at just the right value to be resonantly excited by the pump operating speed. A concrete pier support with a rigid clamp near the pipe flange inexpensively solved the problem, which the plant had tolerated for six months. 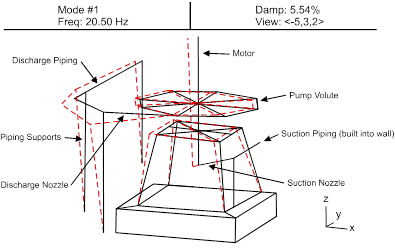 Outline sketch of the pump, motor centerline, based edges, pedestal edges, discharge piping, and pipe supports. The solid lines show the undeflected shapes, while the dashed lines show the deflection pattern of the vibration.

TAP™ (“Time Averaged Pulse”) experimental modal analysis impact testing is a special technique developed by MSI engineers that can sort out structure or rotor natural frequencies while the pump or other machine is operating, unlike other impact or “bump” tests. Two distinct features of the TAP™ test are: 1) it properly accounts for the boundary conditions set up by the condition of service, e.g. impeller annular seal interaction (Lomakin effect), and bearing dynamic stiffness and damping, as well as enclosed water and flange tightness; 2) it is able to identify any problem or potential problem without any downtime of the tested pump or nearby equipment, which can be important in many applications and industries.

If you would like help our help solving your seemingly unsolvable pump vibration problem, Contact Us today!