In response to the flood damage to New Orleans by Hurricane Katrina, the U.S. Army Corps of Engineers Hurricane Protection Office awarded a design and build contract to a new prime contractor in 2007.  The goal was to increase the pumping capacity at the 17th Street and London Avenue canals, allowing for future worst case hurricane drainage to be pumped out of the city and into Lake Pontchartrain.  The design and construction of the pumping stations involved several massive pumping platforms, 33 huge vertical turbine pumps, diesel engines, gearboxes, and piping.  The design team consisted of notable firms, and Mechanical Solutions, Inc (MSI) was recommended to analyze system dynamics, including evaluation of the platform design with regard to vibration. The complex design/ evaluation/ construction project was completed on-time, prior to the 2007 hurricane season.  It wasn’t until the 2008 season that the platforms and pumps were tested by Gustav, a strong Category 2 Hurricane.  Under those severe conditions, the pumps were found to operate as designed in a superb manner, keeping the potential flood waters from Gustav safely in check. 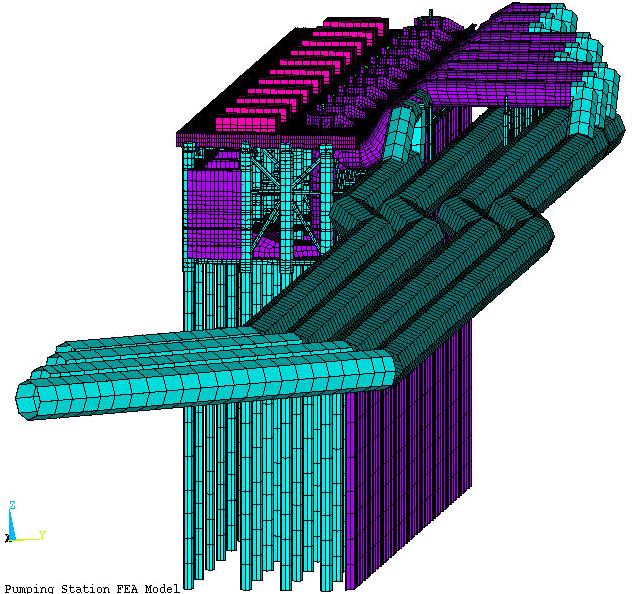 Using finite element techniques, MSI was able to predict the worst-case vibration response of the structures as a result of the operation of the high-power mechanical equipment.  Complex three-dimensional finite element analysis models were generated and analyzed such that assessments could be made in a timely manner and, if discovered, problems addressed prior to construction completion.

The 5 million degree-of-freedom ANSYS model of the 17th Street Station consisted of a combination of solid, shell, beam, and mass point elements representing the platform structure, soil strata, mechanical equipment, and piping.  The goal was to avoid resonant conditions that could lead to structural failure or improper function of the pump system.  Estimates were made for the forcing functions imparted to the platform by the pumps, diesel engines, and gearboxes. 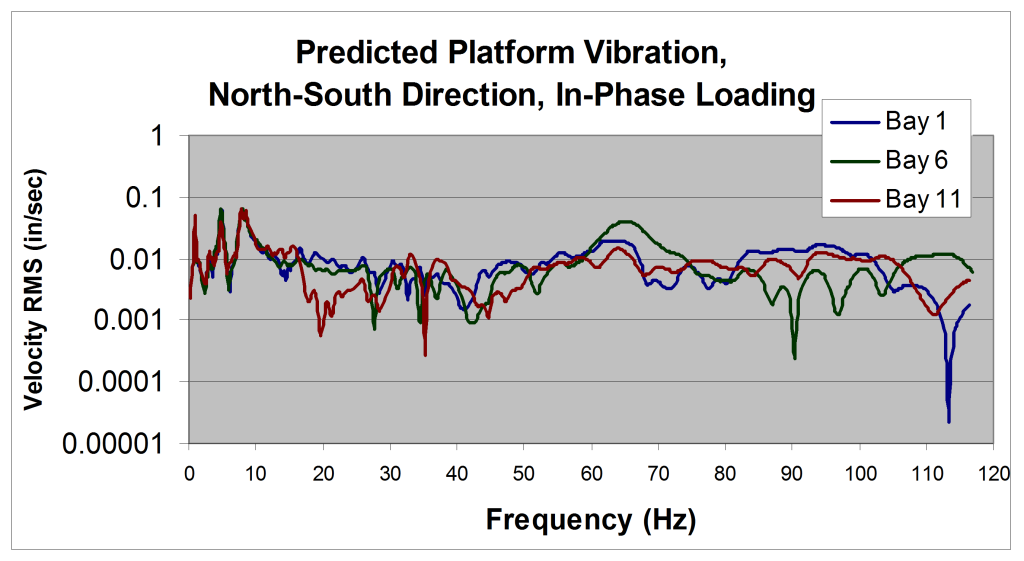 Harmonic Forced Response analysis predicted the vibrational response throughout the station.  Peaks within the spectra revealed excitable structural natural frequencies.  Armed with this information, assessments were made concerning the vibrational behavior of the platform.  Had the vibration levels been predicted to be excessive, the FEA model would have provided an analytical tool for redesigning the structure.  For example, resonant natural frequencies could have been de-tuned by the addition or subtraction of platform cross-members.  After completion of construction, such modifications would have been very costly since the substructure of the platform is submerged.   In addition to the structural vibration analysis, MSI also performed an acoustic evaluation of the discharge piping and manifolded header system to assess the potential for acoustic resonance within the 9 foot diameter manifolds leading to the lake.  No such problems were identified.

The analytical results verified to Weston that the pump platforms were designed to withstand the loadings of the mechanical equipment without excessive vibration at any key location throughout the system.  This result was eventually confirmed by test engineers, and later by Mother Nature herself.