Resolving a Non-Clog Pump Problem via Specialized Testing and Analysis

MSI performed specialized testing on behalf of an engineering firm for newly installed horizontally oriented non-clog pumps in a return activated sludge (RAS) application. All four pumps/motor systems were operating at much higher than specified vibration levels with excessive noise. Braces had been previously installed prior to MSI’s involvement on a trial and error basis with little impact. 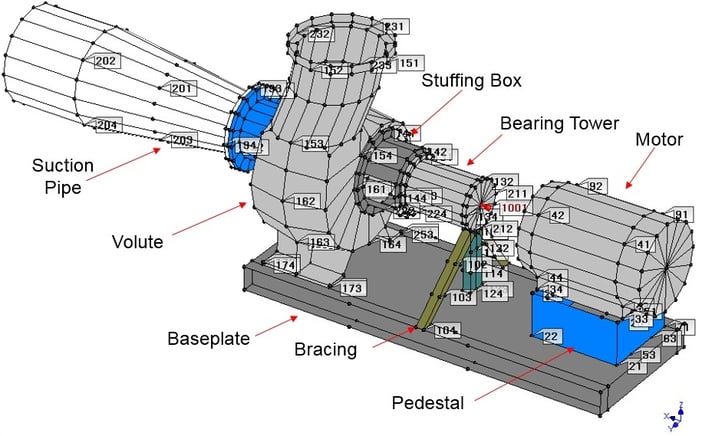 Based on MSI’s thorough testing, which included Experimental Modal Analysis (EMA) and Operating Deflection Shape (ODS), the problem root cause was determined to be a resonance caused by the first “wet” lateral bending mode of the pump (side to side movement of the overhung impeller, visible in the animation below) being excited by vane pass frequency (VPF) when the variable speed pump was operating at the high-end of the running speed range. The problem was exasperated by excessive flexibility at the bearing housing to stuffing box connection. A soft foot between the motor feet and motor pedestal was also identified.   The loud noise was caused by pressure pulsations generated by the impeller when operating at the resonant condition.

Click to view ODS animation. Note the flexibility at the bearing housing to stuffing box connection. Properly performed, a detailed ODS is worth a thousand pictures in helping to understand and explain a system dynamics problem. Motion is exaggerated but to scale.

Based on the test results, MSI recommended shifting the offending natural frequencies to avoid a resonance condition. An “as is” finite element analysis (FEA) model was initially calibrated using the ODS and impact test results to reduce risks. The MSI re-design included more robust bracing along with a shim arrangement to stiffen the bearing housing to stuffing box connection. Additionally, corrective actions for a soft foot were provided. Solutions designed and analyzed by MSI were successfully implemented.

Side View ODS animation at 41.8 Hz

Efficient Radon Fans, coming to a house near you...