Design Assessment Works, But Only If You Implement Findings

Doing a design assessment prior to installation

MSI specializes in doing pre-installation design assessments to identify potential natural frequency problems — and solutions to those problems — before installation.  It's important to note that a comprehensive system-level approach, rather than component-specific analysis, is required to ensure an accurate assessment is made.  The process works, but only if you take action on the findings...

As an example, a very large non-clog variable speed pump (>50 MGD) underwent extensive finite element analysis prior to installation per a specification requirement to predict structural and shaft lateral natural frequencies of not just the pump proper, but the pump mounted on its support piers.

In this particular installation, the pump was mounted on piers that were 10 feet tall!  Certainly this could not be considered a rigid foundation as many pump OEMs like to think.  The FEA analysis had predicted global rocking modes of the pump and support structure assembly in the vane pass range of the pump around 38 Hz because, as speculated, the support pier flexibility was affecting the natural frequencies of the unit.  Using the FEA model of the pump assembly, virtual modifications were made to the support piers to raise the natural frequencies of the pump assembly to have separation margins from vane pass of over 20%.  These design modifications were part of the recommendations made in the analysis report to the pump OEM.  Job well done, and case closed.

However, much to our surprise, the call came in that the pumps were experiencing high vibration.

Our field vibration troubleshooting team was mobilized and impact modal testing, along with Operating Deflecting Shape (ODS) data, was taken and clearly showed structural natural frequencies around 38 Hz in the vane pass operating speed range!  What went wrong?   When our team was out there they asked, “Weren’t the piers supposed to be tied together?”  Unfortunately, due to a mix up in communications between the OEM and contractor, these support pier modifications were never implemented.

The following image shows the initial analysis of the pumps indicating the natural frequency at ~38 Hz prior to modifications. 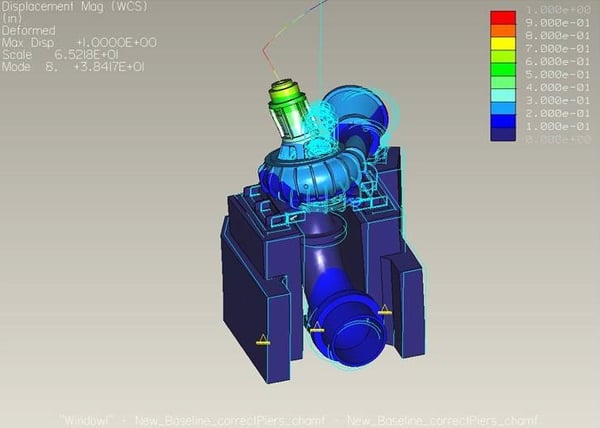 Global rocking mode of the pump mounted on its support piers at ~ 38 Hz, which was within vane pass operating speed range.

The animation below shows the 38 Hz mode shapes from the ODS data taken in the field at same frequency.

ODS animation of the pump assembly at ~38 Hz as installed without recommended modifications to the support piers.

Note the movement of the support piers.  One might think of concrete as being stiff and rigid, but as you can see, that is not the case.  The solution to the problem was to modify the support piers as was originally recommended, along with some tweaks to accommodate ancillary equipment obstructions that were in the way.

The upfront analysis prior to installing pumping equipment can greatly reduce the risk of encountering problems in the field, but naturally it’s equally important to make sure the recommendations are implemented as well!  For additional examples of why the system-level approach works, I recommend the following case studies.

Video Vibration Limitations To Be Aware Of