MSI was contracted to understand and help solve a high vibration problem on an aero-derivative gas turbine driven generator.  Vibration levels as high as 1.75 in/s peak at 1x HP rotor running speed measured on the HP compressor had been reported at full load.  Historically, the installation had a series of failures such as cracking at various locations, rubbing of the rotor on the front case, and a catastrophic failure of the compressor rear frame.

MSI performed a series of specialized field tests to characterize the problem, and performed very detailed 3-D finite element analysis (FEA) to design an interim solution.  MSI’s temporary solution was used to draw the OEM’s attention to the problem and led to their agreement to modify the original design.

Time Averaged Pulse (TAP™) Modal Analysis testing, as well as operating deflection shape (ODS) testing on the unit, were used to determine the bell modes of the HP compressor casing and the combustor casing/ compressor rear frame (CRF), which were discovered to be tuning into the major excitation source of 1x rpm of the HP rotor.  The resonant bell mode produced casing vibration levels high enough to result in casing HCF fatigue cracking.  The figure (above) is a freeze-frame of a modal animation showing one of the resonant mode shapes: bucking motion bell mode of the HP compressor casing.  This mode combined with plate modes of the front end support plate and the longitudinal beams of the baseplate.

Animated linear variable displacement transducer (LVDT) readings showed approximately 650 mils of axial thermal growth of the entire unit (relative deformation between gas generator and power ends), along with a twisting motion of the front and rear frames of approximately 100 mils relative deformation, due to the reaction torque within the casing. Strain gage data was used to determine effects of loading on the power turbine mounting supports and the compressor frame mounting supports.  Most of the strain gage readings exhibited confusing nonlinear behavior due to mechanical strain combining with thermal growth of the legs.  The torque reaction bar was measurements were contaminated by unreacted pressure load from the power turbine nozzle.  MSI identified and sorted out these effects. 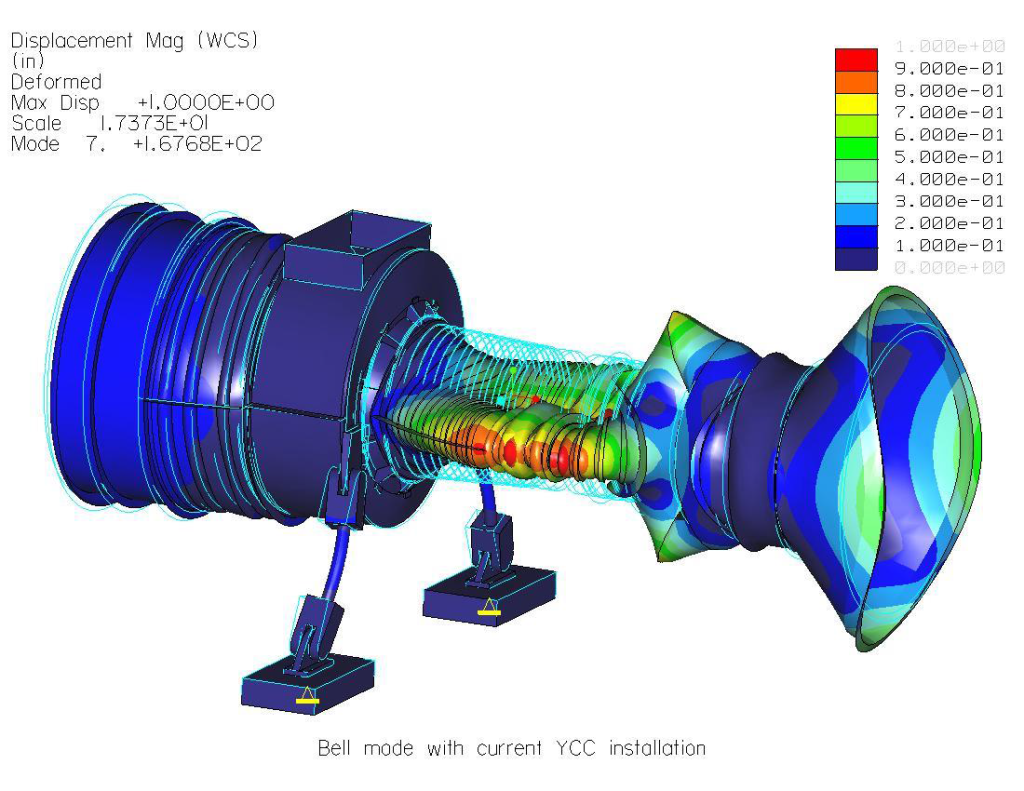 Due to the nature of the vibration root cause, which MSI’s testing demonstrated was resonance of the bell mode, a modification of the gas generator casing was recommended. A 3-D FEA model was constructed and calibrated as an “as built” analysis using test results by MSI.  Proposed modifications were evaluated and refined via FEA, such as redesigning the flange attachment between the HP compressor and the LP compressor, as well as the LP turbine and PT, to modify the edge conditions of the casing to tune it as a “bell” in order to efficiently shift the problem natural frequencies.  Stiffening of the front/ center baseplate and turbine exhaust nozzle was found to also adequately shift the modes, but with less margin.  An innovative solution involving a high temperature damping ring surrounding the casing was also proposed, which eliminated the need for other turbine modifications.  The customer selected the fix that best met their needs, and the long-standing problem was solved with a successful interim fix.